Chile, which is 4,000 km long and 150 km wide, is located in South America, between the Pacific Ocean and the Andes Mountains. The climate varies from north to south and from lowlands to high mountains. The population (18 million) consists of 44% mestizos (white/Indian), 52% European and 4% pure Indian. The Mapuche were never conquered by the Incas or the Spanish. Santiago de Chile Chile (a metropolis of 7 million inhabitants) lies at the foot of the Andes. At Plaza de Armas you will find government buildings and the cathedral with museum. Palacio de la Moneda (1805) is the presidential palace and ministries, bombed in a coup d’état in 1973, where President Allende committed suicide. The changing of the guard is quite impressive. Museo Chileno de Arte Precolombina exposeert exhibits Native American art from before Columbus (1492). Museo Bellas Artes showcases modern Chilean art. In Quinta Normal you will find museums about human rights and history of Chile. Museo a Cielo Abierto (Open Air Museum) displays murals in the San Miguel district. In Parque Forestal (Forest Park) there is a flea market with music and street theatre at the weekend. When this is held, the streets along the Mapocho River are closed to cars and can be enjoyed by walkers and cyclists. Cerro San Cristóbal and Cerro Santa Lucía are great viewing points. Centro Artesanal Santa Lucía presents handicrafts. There is a cable car to San Cristóbal. Famous markets include La Vega and Mercado Central. Calle Bandera is a paradise for vintage clothing. Sky Costanera is a high viewpoint on a sky scraper (300 m) near shopping mall Costanera Center. You can snowboard and ski just an hour away from Santiago. You can book a trip, including equipment. To the south of the city is the popular Buin Zoo. The twin city of Valparaiso is located on the Pacific Ocean. Viña del Mar offers mainly beach fun, however the sea in Chile is cold because of the Humboldt current from the south pole. Antofagasta is the most important port in the north, for the saltpetre mines. Chile has copper, iron, silver, gold, coal and petroleum and can also use hydropower. Centraal Chili is the most fertile area, where 90% of the population lives, and is home to wine production and agriculture too. Valdivia and Osorno were built by the Germans after 1850; they modernised agriculture, education and architecture. Punta Arenas is the southernmost port, and exports petroleum and wool. Tierra del Fuego has been inhabited for 9,000 years despite the harsh polar climate. Daniel Defoe published Robinson Crusoe in 1719, one of the greatest bestsellers of all time, based on the life story of a shipwrecked sailor in the Juan Fernandez eilanden. Isla de Pascua (Easter Island) (Easter Island) is located 3,000 km from the mainland. The huge stone statues (moai) are 500 to 1,000 years old. The population (Rape Nui) (Rape Nui) originated in Polynesia, on the other side of the Pacific Ocean. Easter Island has been on the World Heritage List since 1995. Well-known local dishes include: pastel de choclo (pasty of meat and vegetables), churrasco, grilled meat, cazuela de mariscos: shellfish. Sushi restaurants and helado (ice cream) are popular too. Chile con carne is a Mexican dish, named after the chilli peppers. Hesitating between the beach and the ski slopes? In Chile, you can do it all in a day! 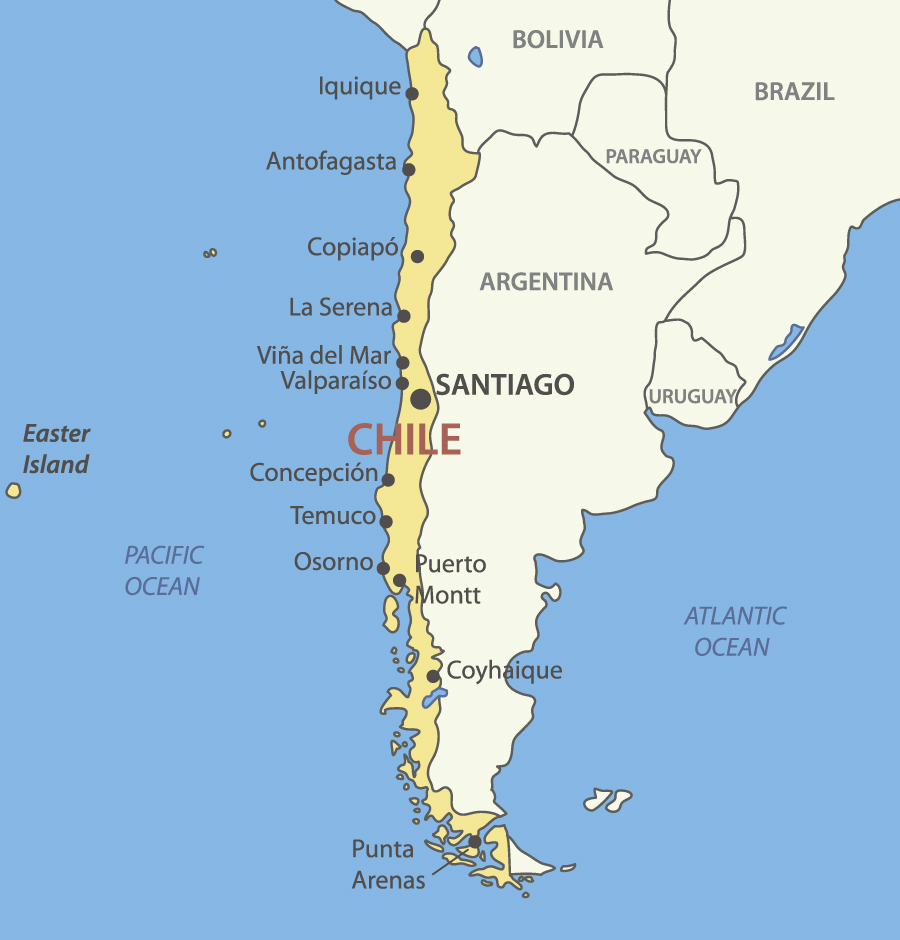 CHILE
ALL HOTELS, APARTMENTS AND HOLIDAY HOMES Does Travel & Cadushi Tours can customise all tours i
More info
View