Attention: All our trips in Suriname are covered by the guarantee of insurance for the Tourism Sector Suriname.Suriname is enchantingly beautiful and is characterised by its virgin rainforests, wildly churning rivers, magnificent falls and an unparalleled wealth of animal and plant life, as well as gorgeous mangrove forests, expansive savannahs and picturesque river beaches. All this – and more – is Suriname: for Suriname is not just a unique destination because of its natural beauty, but its harmonious mix of many different cultures, the unique city of Paramaribo, its wealth of treasures from its colonial past and the possibility of meeting the native population, which still lives its life in accordance with centuries-old customs and traditions, all make a tour to Suriname an unforgettable experience. The country is divided into ten districts: Paramaribo, Nickerie, Coronie, Saramacca, Wanica, Coronie, Saramacca, Wanica, Commewijne, Marowijne, Brokopondo, Para and Sipaliwini. PARAMARIBOWhen visiting Suriname, there is no avoiding Paramaribo. Over half the country’s population lives in its excellently preserved historical capital, with its wealth of buildings constructed in typically Surinamese style and traditional wooden houses for you to take in. The city, designated a UNESCO World Heritage Site, is home to many museums and sights, lively shopping streets and a bustling night life. It’s impossible to get bored in the “wooden city of the Caribbean”! Go shopping in Paramaribo’s heart, in the square formed by Domineestraat, Jodenbreestraat, Maagdenstraat and Steenbakkerijstraat streets, or in one of the many malls, the most famous of which is Hermitage Mall. Or visit the Central Market or go for a leisurely stroll through the Garden of Palms. Map of ParamariboSuriname Tuk Tuk Tours ‘The longest Tuk Tuk in the World’Does Travel & Cadushi Tours and its partner Suriname Sightseeing Tours offer great Tuk Tuk tours. All tours start in Paramaribo. Click on the button ‘TUK TUK TOURS’ in the left menu for more information.Day trips and multi-day toursWe have many activities in store for you when you come to Suriname on holiday, so that you won’t be bored for a moment. Do you love nature and have you been in Suriname for a little longer? Then you can choose one of our multi-day tours. For example, those who just want 1 day out can opt for a day trip or a Tuk-Tuk or sightseeing tour. Enough choice when it comes to activities for holiday trips in Suriname.Lowest price guaranteeAre you looking for a cheap flight ticket to Suriname? Then look no further! Does Travel & Cadushi Tours offers the lowest price guarantee on not only airline tickets, but also hotels and car rental. So you have come to the right place for affordable holiday trips to Suriname.Years of experienceDoes Travel & Cadushi Tours was founded in 1960 and has many years of experience in the travel industry. Anyone who books a holiday trip to Suriname with us is guaranteed to be in good hands. Will we see you soon in Suriname? 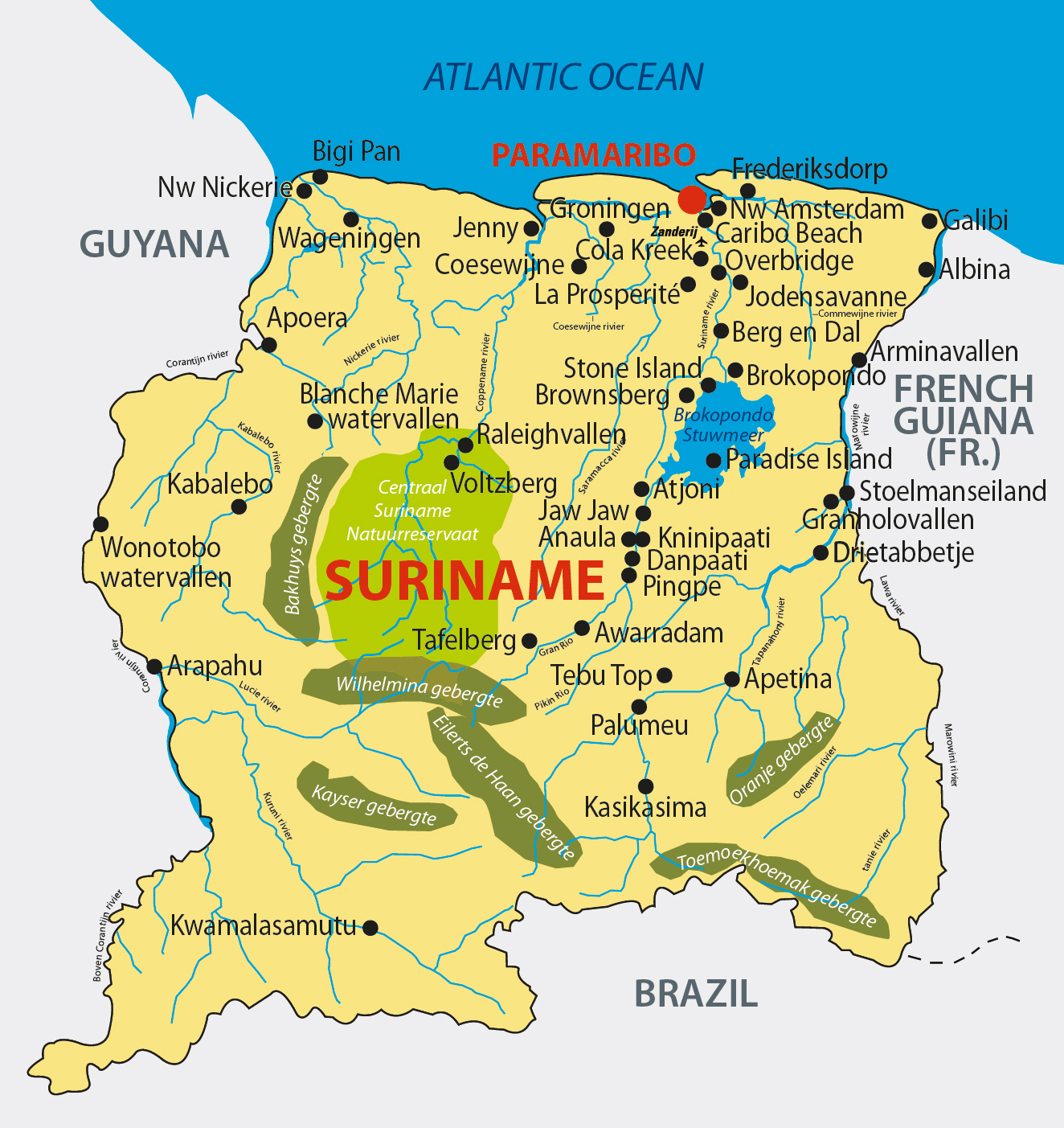 SURINAME
The Kolibrie Apartments is located in South-Paramaribo, just outside the city center. In this quiet
More info
View

SURINAME
Eco Resort Inn, located on the Suriname River, was built according to the original architecture of S
More info
View

SURINAME
A luxury 3-star hotel, just 5 minutes walk from the center of Paramaribo, with an unbridled atmosphe
More info
View

SURINAME
Hotel Babylon is a modern hotel located in the South West of Paramaribo.  Facilities The hotel has a
More info
View

SURINAME
The hotel is conveniently located in the beautiful and historic surroundings of Paramaribo, along th
More info
View

SURINAME
Kekemba Resort Paramaribo is at the outskirts of Paramaribo, close to major highways and 3 km from t
More info
View

SURINAME
Martinus Apartments is situated in a quiet and safe neighborhood in the north of Paramaribo. Nearby
More info
View

SURINAME
At Oxygen Resort, we offer a homely atmosphere in a relaxed and green area, just 10 minutes from the
More info
View

SURINAME
This small business hotel with its warm and cozy atmosphere, situated in the middle of the center of
More info
View

SURINAME
The Sheva Hotel is the perfect combination of classic luxury with 21st century comfort. Location She
More info
View

SURINAME
Torarica is the most famous hotel in Suriname. This luxury 4 star hotel is superbly located on the S
More info
View

SURINAME
Wilhelmina Apartments is a perfect place for your stay in Paramaribo, whether it is for business or
More info
View

SURINAME
Zeelandia Suites is a cozy, small hotel where personal service is high priority and is right in the
More info
View

Suriname, Roundtrip: 25 Days Adventure in the deep interior of Suriname

Does Travel & Cadushi Tours was established on July 1st 1960 in Suriname and therefore has extensive experience in the Travel & Tourism industry in the country. We can provide all Destination Management Services for you in Suriname.

Does Travel & Cadushi Tours has taken care of trips to and in Suriname for tens of thousands of guests from the Netherlands, Belgium, Germany, Curacao, Aruba, St Maarten and the USA. In addition, various group and incentive trips have been organized for Dutch GPs in collaboration with Traveldoc, Rabobank Nederland, Suriprofs and Rotary Nederland, among others. Does Travel & Cadushi Tours offers tailor made services that can be tweaked to suit your personal needs.

Select your tour-type below.

You can, of course, also combine your trip to Suriname with another destination. What about Aruba, Bonaire, Curacao, St. Maarten? St. Maarten, Trinidad and Tobago, New York, Miami, Guyana or French Guiana? We have put together tailor-made trips for you, which are completely customized to your personal wishes. Would you like a luxury hotel, a mid-range hotel or a low budget hotel or would you rather have an apartment or holiday home? Does Travel & Cadushi Tours can book accommodation for you at any of the above destinations. Does Travel & Cadushi Tours is the right partner for the transfer to and from your accommodation too. We can also organize car rental car or book other tours at the different destinations.

A combination trip involves visiting multiple destinations. How about 1 week Miami and 3 weeks Suriname? Or a combination trip with Curaçao? You first fly to Curaçao and stay there a week, you then fly from Curaçao to Paramaribo and then fly directly from Paramaribo to Amsterdam. Anything is possible, with the very best service and best rates tailored to your personal needs! Our travel consultants will be happy to give you all the information you need.

BACK TO YOUR ROOTS (Diaspora package)

An important group among these travellers is fellow countrymen born in the Netherlands. The so-called ‘second generation’, whose parents or one of them were born in Suriname. These children develop links to the Surinamese culture and especially the food from birth. They usually have friends in the Netherlands with a Surinamese background, but many do not know Suriname and are naturally very curious about their roots. This type of traveller would enjoy a discovery trip to Suriname and would prefer to stay in a hotel or apartment rather than with their uncle, aunt or grandmother. For this group, Does Travel & Cadushi Tours offers:

During this tour, within one week, we will provide a great overview of Suriname, historically, culturally and socially. There are several special tours where we introduce you to the people and their history; we also run our exclusive vegetable-fruit and fish tours.
These unique tours have been specially created and developed for the Back to your roots tours. The programme is completed within 1 week so you have plenty of time to yourself. The full programme and price are available on request.

SPECIAL BUSINESS TRIPS – ALL UNDER ONE ROOF

Suriname is made up of over 90% forests and is also rich in resources. In the past, bauxite was the main focus of the economy. Today, it is mainly the gold, oil and gas sectors that are flourishing. At the moment, quite a few businessmen and expats are making their way to Suriname. For them, it is important that everything is well organized. Not only the tickets but also the stay in Suriname needs to be organized flawlessly, so that top performances can be realised and time need not be wasted on peripheral issues. Does Travel & Cadushi Tours will offer leisure trips to Suriname as well as special business trips through its dedicated business department, starting this year. You can use the following services if you wish: 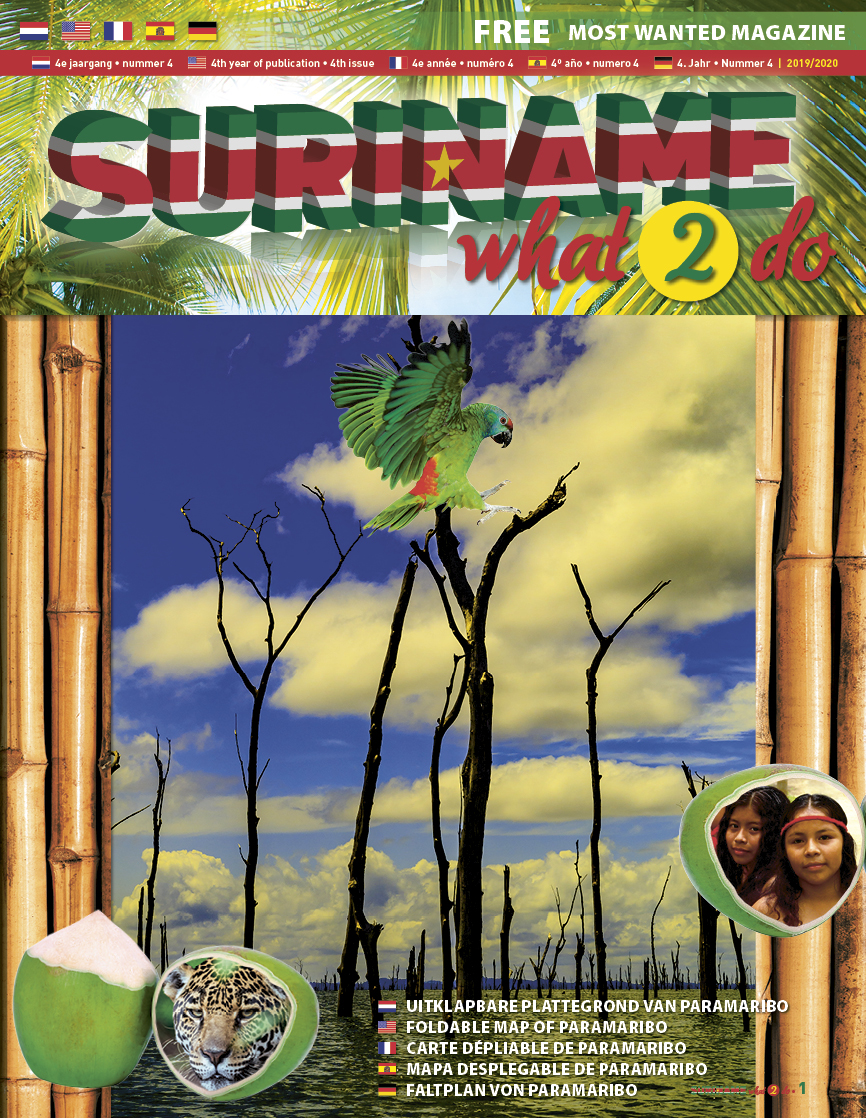 When you arrive at the airport in Suriname, you will be taken by bus or private car to your accommodation or resort in Paramaribo. When you arrive at your accommodation or holiday home, you will find an envelope with useful information about the opening hours of our offices and the emergency number of our hostess service. You will also receive the brochure Suriname What 2do with information about Suriname and a map of Paramaribo.

Guests staying at a hotel will be visited by our hostess the next day. They will inform you about important matters before and during your stay.

During your stay in Suriname you can always visit one of the offices of Does Travel & Cadushi Tours. This is located in the centre of Paramaribo at the Burenstraat 4 or in the middle of the entertainment centre at the van Sommelsdijckstraat 1 (opposite Torarica Group of Hotels). You can also call one of our offices. We will always try to help you.

If there are any major problems, one of our tour guides will visit you. For emergencies you can call the emergency number 24 hours a day, 7 days a week.

With our comprehensive team in Suriname we will try to make your trip as pleasant as possible and any complaints will be dealt with immediately. 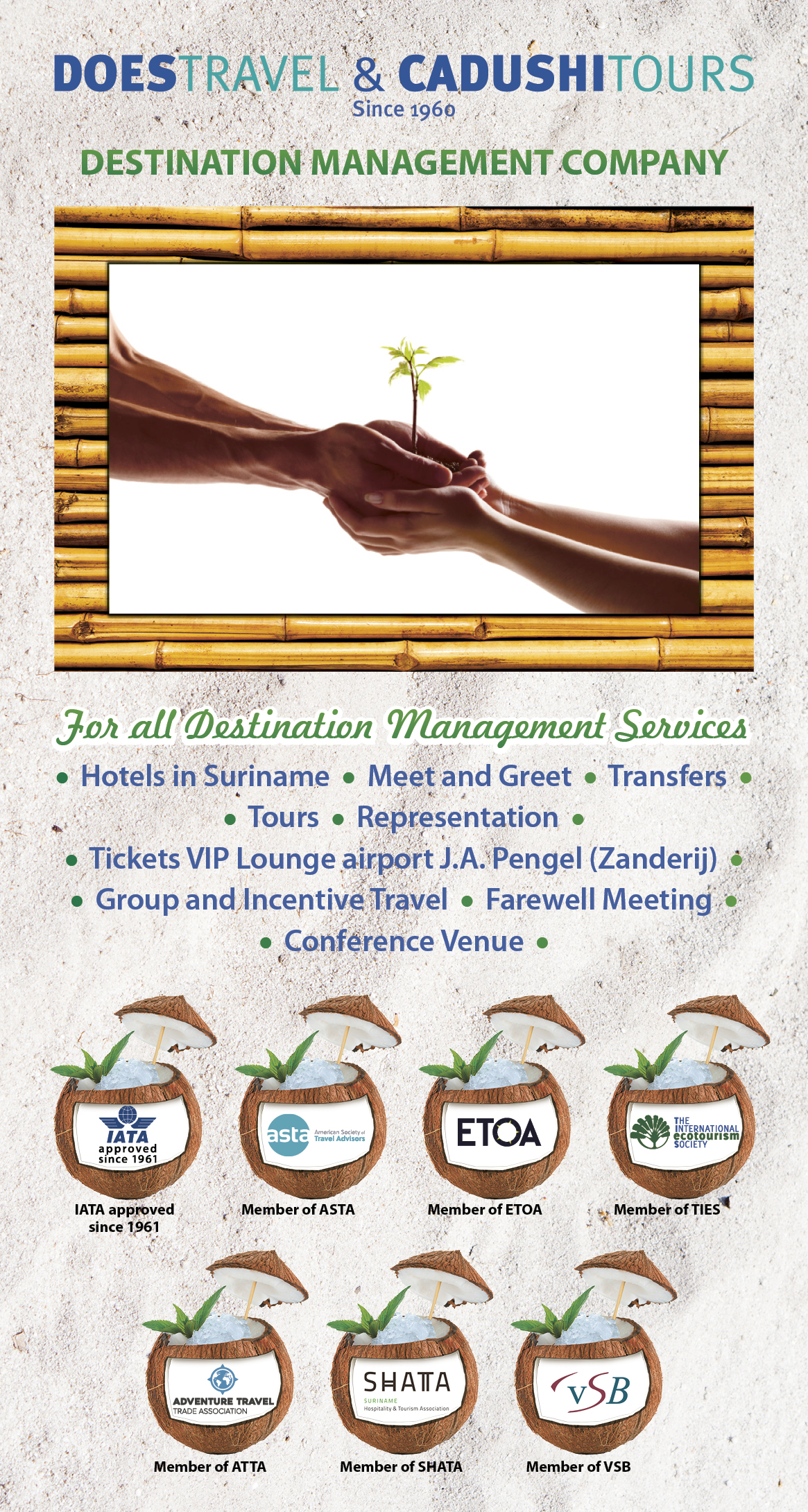